Photo courtesy of The Denver Public Library, Western History Collection, Call#X-19493
Photo believed to be Benjamin and Annie Brown in front of their home at 410 Marion (originally Gorsline) Street
About Us – History 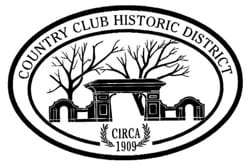 Country Club Historic Neighborhood, as the name suggests, was developed in conjunction with the Denver Country Club, which is located to the south of the neighborhood, across First Avenue. Generally, the layout of the streets and lots in the district is far more generous than the typical grid. It is the combination of different streetscape configurations combined with a range of early 20th century architectural styles that create the unique character of our neighborhood.

In the first years of this century, a group of wealthy men who had organized the Overland Park Club changed the name to the Denver Country Club and began looking for a new site. In 1902, sale of 120 acres along Cherry Creek was made to the club, and the same day this group incorporated the Fourth Avenue Realty Company and purchased the land to the north which was to be developed for housing. 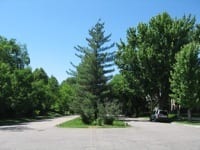 The Fourth Avenue Realty Company chose William E. Fisher as its principal designer. Fisher designed landscaped parkways (the picture to the left is an example) as the defining elements of the area, basing the design on concepts espoused by Frederick Law Olmstead. Fisher also designed the Mediteranean gateways (similar to our logo at the top of the page) along Fourth Avenue, setting the tone for the other subdivisions included in the district.

Recognition of Country Club’s significance was first made in 1979 when the western half of the district was listed in the National Register of Historic Places. The Country Club Historic District was designated as a Landmark District by the City of Denver in 1990. The L-shaped district includes 380 residences and was found to qualify as a Landmark District because of its historical, architectural, and geographical significance.

Historical significance relates to its association with Denver’s social, political, and economic elite, including figures such as Mayor Robert Speer, founders of most of Denver’s major banks, and heads of some of Denver’s major mining, oil, sugar, and real estate companies. It also is representative of exclusive residential development of the time.

The district incorporates some of Denver’s finest examples of the Denver Square style and the Gothic, Colonial, Mediterranean, and other early 20th century eclectic revival styles. Furthermore, many of these houses were designed by Denver’s most prominent architects including Fisher and Fisher, Benedict, Biscoe, Gove and Walsh, and Varian and Sterner.

This history was exerpted  from the “Design Guidelines for Country Club Historic District” document which was published in 1995 by the Denver Landmark Preservation Commission & Planning and Development Office.