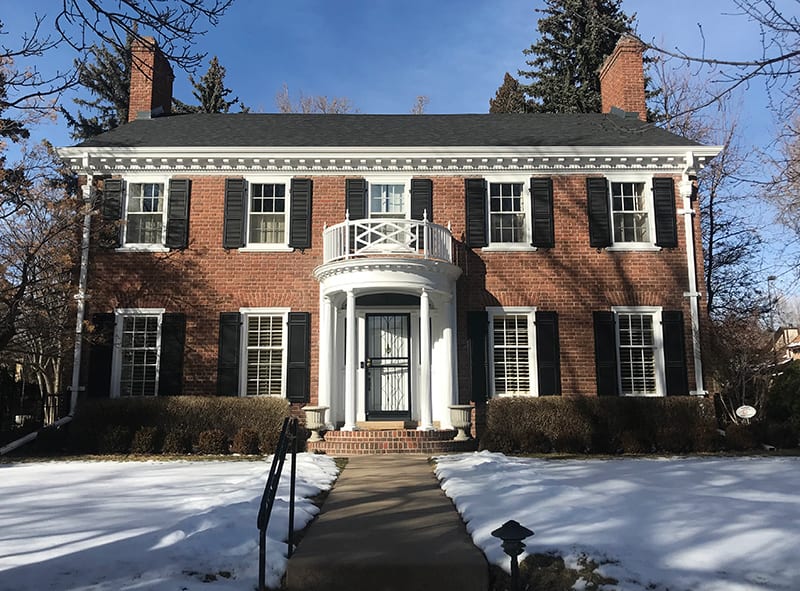 In November 1928, on the day after Herbert Hoover was elected President, the Fontius family (of Denver’s Fontius Shoe Co.) moved into their new home at 556 Circle Drive. The house was designed by notable local architect Lester Varian. In hopes of creating a “real” colonial home in Denver, Varian and the family consulted with esteemed Boston firm Cram and Ferguson who designed many prominent residential, university and church buildings on the east coast. The colonial style is evident in the tall chimneys, brick laid in Flemish bond, window frames set flush with the brick and a mantel copied from a house in Salem, Massachusetts. One of the most distinct elements of this home is the semicircular portico over the front door.
Harry and Helen Fontius lived in the house for many decades and raised their two children, Jean and Harry Jr., in the home. As business and community leaders, the Fontius’s entertained frequently and hosted many other familiar names in Denver such as the Jonas Fur family. They also held annual events for Colorado College. Additionally, they hosted their daughter Jean’s wedding in the side yard.
John and Mona Ferrugia are just the fifth owners of this neighborhood gem and have called it home since moving to Denver from Washington, DC in 1989. Though they have remodeled the house over the years to adapt to today’s family life, the Ferrrugias embrace and enjoy the history of their home and have kept many of the architectural elements in tact. They also carry on Mrs. Fontius’s decades-long tradition of hanging the U.S. flag over that beautiful portico.